Leadership and Direction.  Two simple straight-forward words.   Many people, however, struggle to do one or both.  So let's take a brief look at both.

Simple?  Well it should be, but many people are either
a)afraid to take a leadership role, or
b) don't want the responsibility of the role.  Note though, they often like having the "position title"!

Leaders influence.  You can't be a leader and not influence.  If you're not influencing others you are not leading.  Leaders can influence either positively or negatively.  You decide it you want a team that works together or a team that splits.  In community radio a team that is cohesive, focused and coherent is essential.  If it's not, the community radio station/group will fall apart.  And usually quickly, unless a leader arises that can help the group re-focus on their common goal. 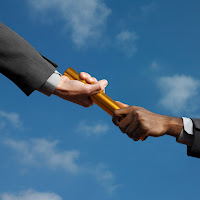 I used to find that taking Leadership roles were extremely daunting.  Yet as I have reflected over the past 30+ years of my life, I realised that I am often in leadership roles.  My suggestion to you is this - think about what you've achieved in your life and the times when you may have taken on a leadership style role.  You'll be surprised how often you do!

The other word we'll briefly look at is Direction.  There are a number of definitions but we'll look Direction in light of the following:

Direction is all of the above-mentioned definitions and more.  In this article we're considering this word in relation to Leadership and Community Radio.  Simply when a Senior Member of Staff (let's use the position of Station Manager for an example) gives a direction, it is to be followed.  If the Station Manager is leading to build his/her team then when a direction is given, it is to build the team and the station.

When an instruction or series of instructions are given to achieve an outcome, it is not for the staff or even volunteers to question or argue the direction.  That is abusing authority.  Yes I am saying that.  When an order or command is given, it is not usually given to hurt but to build and to achieve a postitive outcome.

For example you may be the person who records Station Announcements and your Station Manager may give a direction for a series of Station Announcments to be recorded.  Once you have been given the information, it is not for you to start arguing about which ones you'd like to record.  You have been assigned a task it is is your job to complete it.

Perhaps you have been assigned to write an article, then don't argue about it, do it.  You may think, of course I'll do it - it's my job.  But you will be surprised how many people will argue either in your face or nowdays via social networking!  (A word of advice- think before you rant and rave on social networking, your boss may be reading it!)

It's important to get behind your Station Manager and his/her team.  Focus on the common goals, not on your own agenda.  Community Spirit is important in community radio - it's not the place to "push your own barrow".
Posted by Sal