Hi Everyone,
This has come to my attention.
Currently The Marriage Amendment Act 2004 that was passed on 13 August 2004, defines marriage as: “a union between one man and one woman to the exclusion of all others, voluntarily entered into for life”.

We need to stand up and protect our marriages and families... 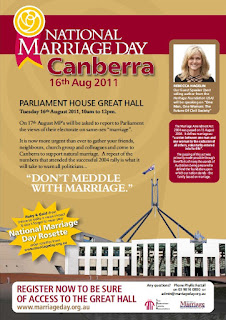 From www.marriageday.org.au   "It has recently been announced that on 17th August MP's will be asked to report to Parliament the views of their electorate on same-sex "marriage".

It is now more urgent than ever to gather your friends, neighbours, church group and colleagues and come to Canberra on August 16th.
Marriage is too important for you to sit by and leave it to someone else to defend. At times like these it is crowds that talk!

This is you chance to be a part of democracy in action. Come in bus loads to support natural marriage. A repeat of the numbers that attended the successful 2004 rally is what it will take to warn all politicians...