As we view television listen to radio and read social media, it's easy to become distracted by the constant bombardment of information. 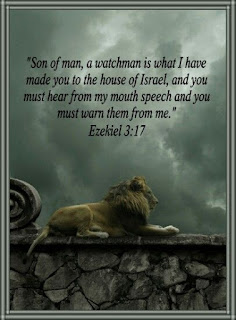 But, are we being a 'watchman'?   Well, what is a watchman?  A watchman in ancient times kept lookout to warn the people/town/city of a potential threat.  Their job was essentially monitor the comings and goings and if a threat appeared, then the gates could be closed and the city put on alert to prepare to defend itself.

How often do we act as a watchman for what comes into our homes?  What about what we allow into our lives, our thinking?

Ezekiel was given the role of watchman by the Lord.  "Son of man, I have made you a watchman to the house of Israel: therefore hear the word at my mouth, and give them warning from me."  Ezekiel 3:17

The watchman had the duty to warn the city and sometimes this would have been difficult.  To suddenly stop trade, and traffic in and out of the gates could cause chaos and anger.  So the watchman's job wasn't at all glamorous.

As parents, and citizens of our nation, we too need to be a 'watchman' of what goes on around us.  Let's not just focus on ourselves.  Our children and our nation need people to stand up and warn about those things that would destroy our families, moral compass and culture.